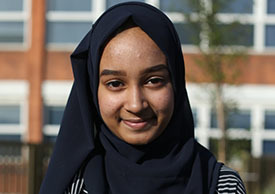 Genipa Ullah joined the Forest Lane school in 2016 after her family moved from Italy for her father’s work. And among her GCSE results today (Thursday, August 20) were a 9 in English literature and an 8 in English language. The 16-year-old, who wants to become a teacher, said: “I was so scared when I joined as I didn’t know anybody or the language, it was terrifying."

“Luckily there were people who spoke Italian who showed me around the school and translated for me. I didn’t want to leave Italy at first but it’s been absolutely life-changing for me. I love English, I like to take quotes and explode them and put my own thoughts into them.”

She is among a cohort which has achieved the best GCSE results in the school’s history despite not sitting exams.

The school achieved a Progress 8 score of plus 1.54, which means pupils earn on average roughly one and a half grades higher than at other schools.

Among the top achievers was Riyad Ahmed, from Forest Gate, who received seven 9 grades and wants to study maths and computer science at college. He said: “I’m ecstatic. It’s a massive weight off our shoulders. We had no idea what was going to happen, the uncertainty was stressful.”

Aamina Chuniya, 16, from Forest Gate, received 9s across the board except one 8 in computer science. She said: “That one 8 has annoyed me. I would have loved to do that exam and got it right. We were worried all our hard work would go down the drain. We had been staying at school until 5pm everyday working towards our exams.”

Waheeda Tabussum, 16, said: “I didn’t do an exam and I really wanted to prove it to myself that I could do it. We missed prom and lots of events I wanted to celebrate with my friends. When we heard exams were cancelled everyone in the school was crying. We came in to say goodbye and even teachers were crying, everything was so uncertain.”

Leuar Hysaj moved to London from Albania in 2015 not speaking a word of English, but achieved a 7 in English literature and a 6 in English language. Now hoping to study physics, maths and economics A-levels, he said: “I came here and couldn’t speak English but the school helped me in every single way. They supported me when it was really hard, everyone was friendly and helpful. I want to thank them a lot.”

Headteacher Thahmina Begum said: “It’s the best results in the history of the school. All the hard work has paid off. I know they’ve not had to take exams which is a shame because we’ve genuinely had the best cohort this year. Everyone has overcome huge obstacles this year. The students were saying all the last five years have been building up to this day. To see their fruits of their labour pay off today is a very proud moment.”

Read the full story in the Newham Recorder: